| Muhammad(P.B.U.H)… as leader |  Rights of Religious Minorities in the State of the noble Prophet in Al-Madina Al-Munawara 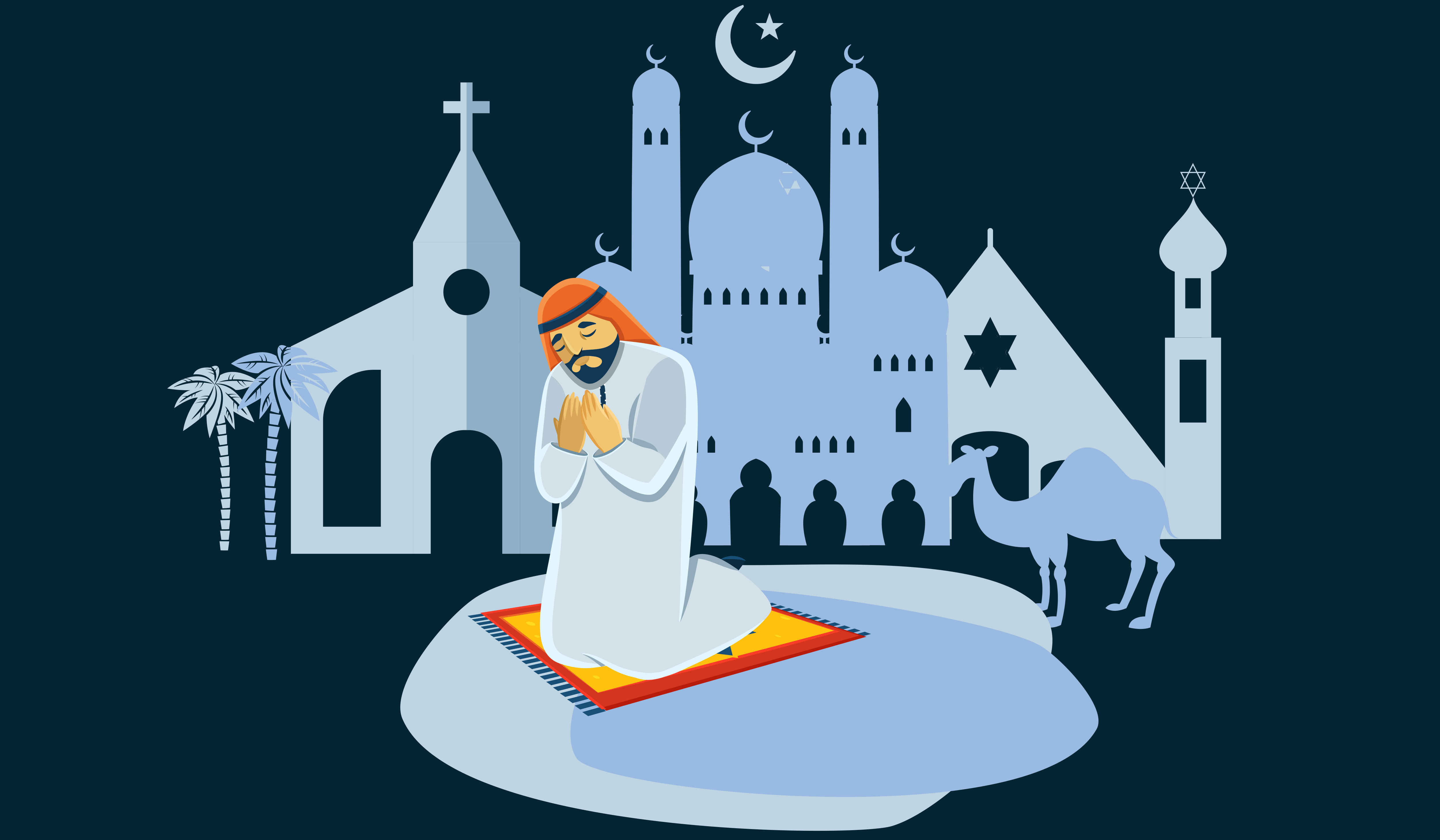 Since Islamic religion has universally been acknowledged as a world-wide religion-aiming at the achievement of human welfare and happiness at anytime and anywhere, regardless of his affiliation, his race and color, it bears within its folds such complacency that qualifies it to contain not only its own community but also the opposition party as well, employing the policy of dealing with the other (in a better way) particularly the society of Al-Madina, for being considered as the capital of the Islamic State-as being characterized by sociological multiple population in particular, the Jews, Christians and other minorities whose rights are to be granted and secured amongst which are: the right of adopting belief and the right of giving opinion.

The Right of Adopting Belief
Since Islam has been the religion of freedom, the binding terms and conditions of its constitution urged its people to employ reason and know how to achieve the sound belief, and this has made the Islamic constitution declare directly that: "There is no compulsion in religion. Verily, the Right Path has become distinct from the wrong path. Whoever disbelieves in Taqgut and believes in Allah, then he has grasped the most trustworthy handhold that will never break. And Allah is All-Hearer, All- Knower."(Al-Baqara 256) and no one was given the authority to impose his order on the other by means of compulsion.

"And had your Lord willed, those on earth would have believed, all of them together. So will you (O Muhammad, then compel mankind, until they become believers."(Yunis:99) and this confirms that Islam is the religion of freedom and not the religion of the sword and blood and this will be fixed in what is called as: The War of the Apostates and the Islamic Conquests except that which by proof would ascertain that the right of adopting belief has been an Islamic privilege at the time of the holy Prophet's State.

The Prophet (P.B.U.H.) interpreted the complacency of his religion through his bonds and treaties which he had written to the Jews of Quraidha tribe and Qaynuqa together with that which is included in the already - mentioned of Al-Madina Al-Munawara document and other human resolutions such as: prohibiting doing mischief to any non-Muslim whatever his affiliation may be as this is clear from the Prophet's hadith in which he says:
"Whoever does wrong to a Non-Muslim figure, I will be his opponent on Doomsday."
The Right of Giving Opinion
The noble Prophet granted to people the right of giving their opinions about what they believe and preventing them from monopolizing that or clinging to its forelock and taught them the culture of listening to the other and availed to them the opportunity of giving their opinion, together with paying due respect to one another or rather farther than that: respecting
his belief even though it may be different from the Islamic belief in outlook amongst which preventing people from calling him bad names or insulting their gods:

"And insult not whom they (disbelievers) worship besides Allah lest they insult Allah wrongfully without knowledge: Thus We had made fair seeming to each people its own doings; then to their Lord their return and He shall then inform them of all that they used to do." (Al-An'am:108) with all that he bound himself to of good manners and high morals in dealing with his foes and opponents of whatever caliber they may be through lenient talk and smiling appearance. Look at how the holy Quran visualize this situation:

"And by the Mercy of Allah you dealt with them gently. And had you Muhammad been severe and harsh-hearted, they would have broken away from about you; so pass over (their faults) and ask (Allah's) Forgiveness for them and consult them in the affairs, then when you have taken a decision, put your trust in Allah, certainly, Allah loves those who put their trust (in Him)." (Aal Imran: 159).
In addition to all good manners of the Prophet there you find him make rules about the way to deal with others. See what the holy hadith says in this respect:
"Verily, you can't contain people by your wealth but they can be contained by your broadness of your breasts, transparency of features and complacency of manners." Considering the secret of his message lying according to his words in caring about the people- the whole of the people- which is his golden rule in dealing with whole majority of the different people and making his manners on the ground of reality accord with the demands of the holy Quran." I am commanded to look after the people as much as being commanded to convey the heavenly message of the Lord to the people."
The leading Prophet obliged his civil society to maintain the culture of the dialogue in a way that dialogue becomes the common language among the people …through which one can understand the other and make them understand a variety of human issues among which are issues of belief and obliged the citizens of his State to maintain the literature of dialoguing and wisdom that comes from differences in opinions in contrast with the Islamic universality of acknowledgement as it distinct in the following verse:

"Invite (mankind O Muhammad to the Way of your Lord (i.e. Islam) with wisdom (with the Divine Revelation and the Quran) and fair preaching, and argue with them in a way that is better." Truly your Lord knows best who has gone astray from His Path and He is the Best Knower of those who are guided."(Al-Nahl:125)

Here, we adduce to you another example which also concentrates on how to argue with people to convince them that what you argue with is true. So, contemplate on the following verse: "The good deed and the evil deed cannot be equal Repel the (evil) with one which is better (i.e. Allah orders the faithful believers to be patient at the time of anger and to excuse those who treat them badly and verily, he between him and you there was enmity, (will become) as though he was a close friend." (Fussilat:34)

Social Diversity at the Start of Islam Ideal in Outlook-Magnanimous in Application
The noble Prophet also has prepared for his civil society the culture of refusal to any kind of qualitative distinction and prevention of scorning one kind at the expense of the other according to the divine rule which says:
"O mankind! We have created you from a male and a female, and made you into nations and tribes, that you may know one another. Verily, the most honorable of you with Allah is that (believer) who has Al-Taqwa (the pious).


Verily, Allah is All-Knowing, Well- Acquainted (with all things)" (Al-Hujurat:13) and regarded this diversity as a healthy case deriving out of it a mystery out of so many mysteries of creation and a verse out of multitudes of verses whose creative power is Allah, to Whom be ascribed all glory and perfection…and this is distinct in the content of the following verse:

"And among His Signs is the creation of the heavens and the earth and the difference of your languages and colors. Verily, in that are indeed signs for men of sound knowledge.(Al-Rum: 22).

#The_Prophet_of_Islam
The most Readable one
War… The Forced-Choice in Islam
1493
Giving the Zakat of Al-Fitr / Signs and Consequences
1152
To Whom Should Al-Khums be given?
1151
Zakat (Al-Fitrah)
1090
The Companions of the Cave A Story
977
Zakat Al-Fitrah …How much? When…? And To Whom?
972
Kinds of Az-Zakat and Charities… when Islam grants its individuals good living
965
Malik Al-Ashtar Al-Nukhaee… His Kinship and Birthday
943
Zakat… To whom is to be paid? What are the conditions imposed on those who possess wealth?
743
The Islamic Year and the Migration Calendar
724