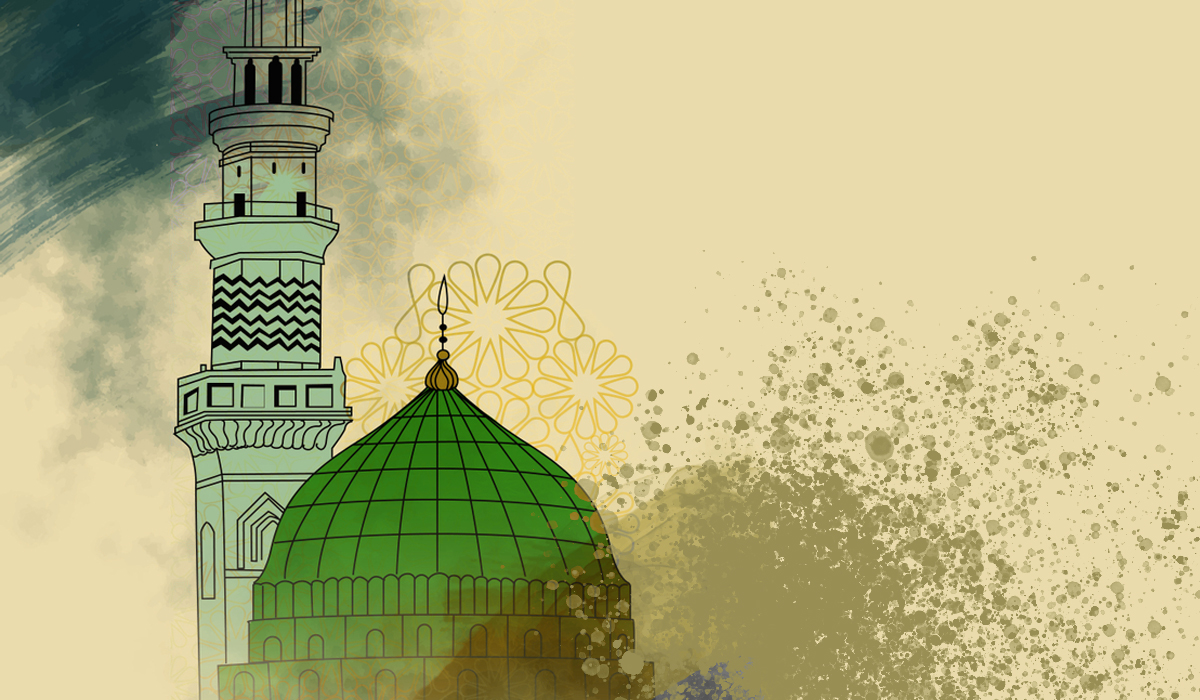 The Prophet Muhammad (P.B.U.H.) was born, lived and died when he got to be 63 years of age- 40 years of them were spent in Mecca calling people to adopt the concept of the One God and the return of man's position with regard to his relationship with Allah, with people and with himself and directing himself towards the One God religion and delivering mankind from the loathsomeness of polytheism while at the same time, he spent ten years of them in Al-Madina Al-Munawara as prophet and leader of a whole nation and a whole society to die after all-poisoned and martyred, placing his honorable head in the lap of his cousin and trustee Ali bin Abi Talib (P.B.U.T.)
His death was on Monday on 28th of Safar, the tenth year or the 11th year of the honorable migration The difference in the year of his martyrdom has nothing to do with feeling suspicious of its date but rather limiting the beginning of the migration by either being from Rabee Al-Awal (that is what the second Umayyad political caliph Umar bin Al-Khattab had defined the beginning of the migration calendar and this is what usually happens in books of biography and history and in all religions and is not regarded as a negative point in the Islamic Calendar.
We can conclude that Imam Ali (P.B.U.H.) had undertaken the whole matter of washing, shrouding, embalming him and praying for him and permitted the companions to pray for his pure soul individually so that he would engage himself in the matter of his burial procedures in the place where he died in the pure room of his house where his soul rested which is now renowned as the Prophetic Mosque in Al-Madina Al-Munawara to witness after that so many events and happenings which have led to a change in the course of the Prophetic movement.
Among the things he has issued is the isolation of the leaders whom he himself had appointed to keep them as pure spiritual leaders to complete his heavenly Islamic project and take it away from the grip of the civil authority in Al-Madina Al-Munawara to remain as spiritual leaders specialized in preaching people to embrace real Islam only to represent the first and the biggest coup against their legality to hold high official posts and be at closer quarters of what is ongoing of events in the Islamic State which consequently caused a great crack in the essence of Islam.
In the forthcoming chapters, we will endeavor to throw sufficient light on some special casualties in other realms whose effects have spread their shadows to far-off regions of the world their and extended their dimensions up to the present age like depriving some of the trustees of their divine rights in translating his prophet-hood to the nation through their Imamate visions and concepts and clearly show what remained vague and ambiguous for them to comprehend and transferring them to the complacency of the Islamic religion by dealing with the way that is better –far away obligatory submission to religion.
That same case may have led to robbing Ahlul-Bayt (P.B.U.T.) of their legal right of completing the Prophetic Program so as to grant its security from defectiveness, blemishes and shortcomings and to stand as a protective valve against the volatile and perverted trends which may take religion away from its normal course and leave people wallow in the morass of bewilderment, dismay and misguidance.
All these negative disadvantages may be reckoned against Islam like what we nowadays witness of terrorism and violence in the human societies without these guiding hands who can take the Muslims to the shore of safety and security by virtue of the high religious authorities in whom we take much honor and pride till the reappearance of the honorable Imam Al-Mahdi (May Allah hasten his reappearance) (Muhammad is no more than a Messenger and indeed (many) messengers have passed away before him. If he dies or is killed, will you then turn back on your heels (as disbelievers)? And he who turns back on his heels, not the least harm will he do to Allah; and Allah will give reward to those who are grateful."
(Aal-Imran:144).
#The_Prophet_of_Islam
The most Readable one
Giving the Zakat of Al-Fitr / Signs and Consequences
304
To Whom Should Al-Khums be given?
274
Zakat (Al-Fitrah)
258
Malik Al-Ashtar Al-Nukhaee… His Kinship and Birthday
224
Kinds of Az-Zakat and Charities… when Islam grants its individuals good living
209
Zakat Al-Fitrah …How much? When…? And To Whom?
208
War… The Forced-Choice in Islam
183
A True Coup
174
The Islamic Year and the Migration Calendar
172
The Companions of the Cave A Story
140