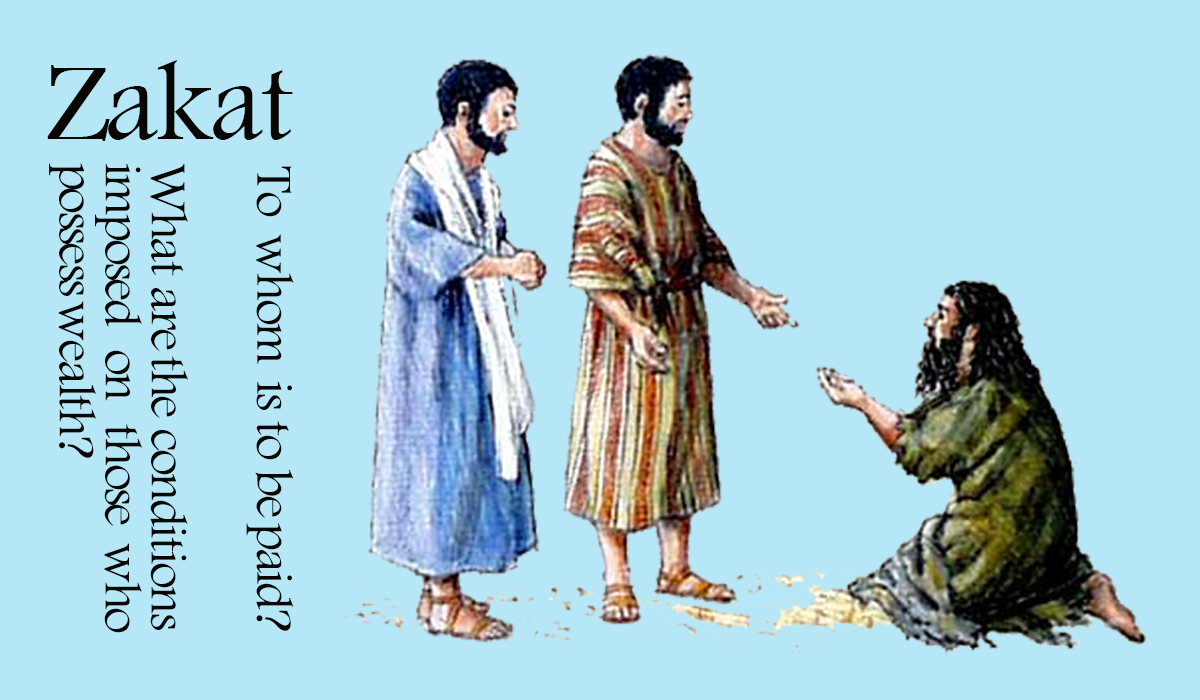 Zakat… To whom is to be paid? What are the conditions imposed on those who possess wealth?

Az-Zakat…is to be paid to those who are legally worthy of taking it and they are eight in number as in the following:
1. The poor one: He is the person who can't provide his annual provision according to his social position, his urgent needs and the needs of his family.
2. The needy one: He is the one whose standard of living is worse than the poor one like that who can't make both ends meet i.e. who is unable to cover his daily wants.
3. Those employed to collect the funds… that is: those who are legally appointed to collect money, check it up and count the amounts received, and be in charge of anything that relates to it……and to finally be delivered to those who deserve it and then deliver it to the Imam or his deputy-the jurisprudent who covers the whole body of terms and conditions that bind the Islamic jurisprudence
4. Those whose hearts are inclined towards Islam but they in origin were weak in their religious faith and belief; therefore, paying Zakat to them is a means of attracting the hearts of the disbelievers towards Islam and to free the captives and those in debt and for Allah's Cause that is: for (Mujahidin) those fighting in a holy war in addition to pushing away the evil and the sedition of the polytheists and the disbelievers.
5. For releasing the captives out of the money collected under the title of Al-Zakat.
6. Those indebted that is: those who were impotent to pay back their debt though they have got the provision of one whole year but on condition that the money given to them is not being spent counter to Islamic beliefs.
7. Paying Zakat for Allah's Cause
It is that kind of Zakat which is given to be spent on public interests like: building roads, bridge or constructing a hospital or religious schools, mosques, shelters for the poor or the orphans and some amounts are located to be spent on cultural consciousness such as: printing useful Islamic books and the like.
8. Paying Zakat for the wayfarer (the traveller who is cut off from everything) and who can't afford to pay the cost of returning to his country; so, for this reason sufficient amounts of money will be given to him out of the funds of Zakat on condition that it shouldn't be spent on acts of disobedience to the Almighty Allah.

There are a number of criteria which Islam has applied to restrict the real numbers of those who deserve Zakat to be paid to them for it is not permissible to pay Zakat to anyone who claims to be worthy of it; therefore, building on the foregoing, it is illegal to pay Zakat to those who have not enough proofs or conditions which confirm their claims that they are worthy of given Zakat.

The conditions which confirm one to be worthy of zakat are the following:
1. Faith: it incurs that the disbeliever does not have the right to receive Zakat and is disallowed to claim deserving it.
2. It is not to be spent on misdeeds and vicious acts.
; therefore, Zakat is not to be given to one who is believed to have been spending it on totally forbidden items ….and also not to be given to anyone who used to help others do misdeeds even though he himself didn't intend to spend it on forbidden items.
Islamic jurisprudents are mostly precautious not to give Zakat to one who is thought to have been not performing the obligatory daily prayers…nor to a drunkard nor to one who is publicly notorious for dealing with debauchery.
3. And that the Zakat giver who is found to be in charge of expenditure-not to give Zakat to his parents or to the children whether be males or females and this will also involve the grandfathers and the grandmothers even though their esteem has got higher than before and sons of the sons even though they got to be lower in esteem…as well as the permanent wife except in certain exceptional cases as in the case that someone of them is being indebted and that he couldn't afford to pay back his debt.
4. If the Zakat giver has not been a relative of the Hashimite family, Zakat shall not legally be given to the Hashimite one. The Hashimite one is he who is affiliated to Hashim- the Prophet's grandfather (P.B.U.H.) from the paternal side.

#Social_Solidarity(The_right_of_the_poor_lies_in_the_wealth_of_the_rich)
The most Readable one
War… The Forced-Choice in Islam
1654
To Whom Should Al-Khums be given?
1311
Giving the Zakat of Al-Fitr / Signs and Consequences
1304
Zakat (Al-Fitrah)
1235
The Companions of the Cave A Story
1130
Kinds of Az-Zakat and Charities… when Islam grants its individuals good living
1116
Zakat Al-Fitrah …How much? When…? And To Whom?
1114
Malik Al-Ashtar Al-Nukhaee… His Kinship and Birthday
1086
Zakat… To whom is to be paid? What are the conditions imposed on those who possess wealth?
900
The Islamic Year and the Migration Calendar
861