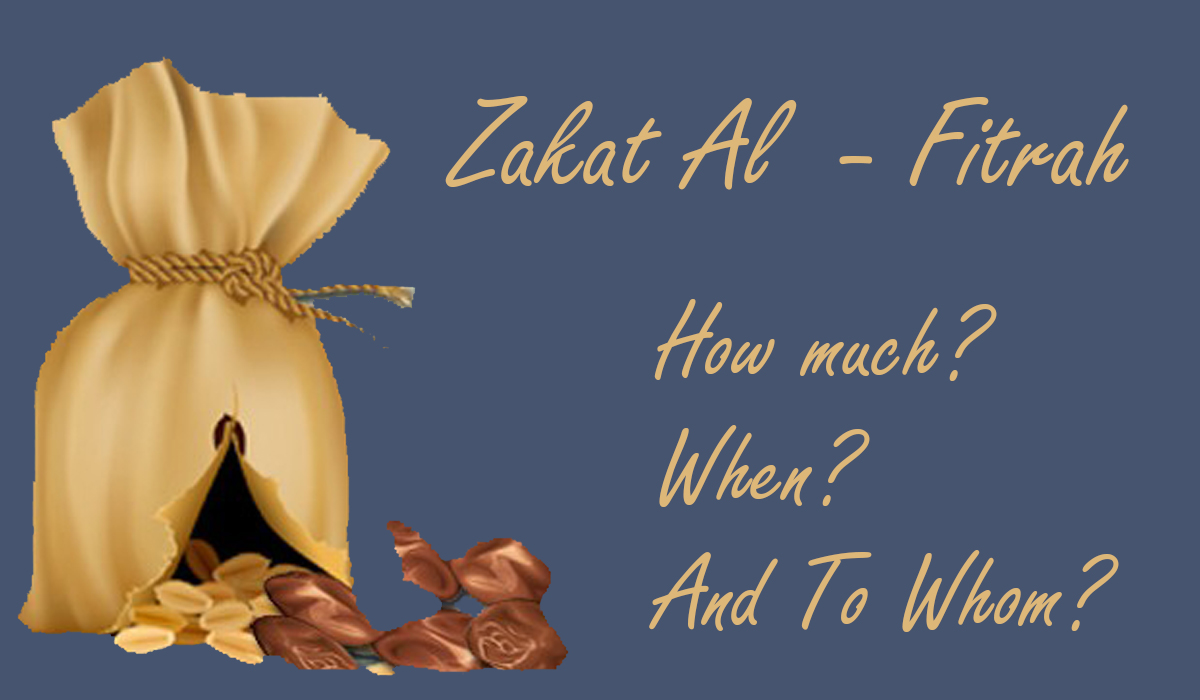 Zakat Al-Fitrah …How much? When…? And To Whom?

What is the value of Zakat of Al-Fitrah?
It is incumbent on the Moslem to extract Zakat of Al-Fitrah from what is common to the people about the meals of the cities, of cereals and other things. Zakat Al-Fitrah may be extracted out of these commonest substances: (barley, wheat, dates and raisin) or other items such as: rice and corn provided that the amount of Zakat out of one of these items must not been defective.
It is also possible to pay the value of Zakat in cash out of what is common in public about the price of each item separately as being sold in the town market….and the amount which is obligatory to be extracted is called "Saa" for each individual which is equal to about three quarters of a kilo… and this amount is to be multiplied by three so that Zakat Al-Fitrah will be 3 kilos per head.
Building on the foregoing, any amount below that, will be insufficient even though the items are of high quality with the value of "Saa" if compared with the bad or ordinary quality. It is also inadequate too, if the "Saa" is composed of two different items mixed together but the amount of Zakat is accepted if pay is made of every different item – that is: extracting for each individual of his family some different item from the other.

When is Zakat Al-Fitrah a must?
As most famous jurisprudents emphasize that Al-Fitrah is to be prepared and collected on the night of the Festival and said that delay of it is also permissible until midday of the Festival to that who didn't perform or catch up with the congregational prayer; they also permitted delay of its payment for a reasonable purpose especially in the case of having it isolated in an early date.
Anyone who didn't pay Zakat or didn't isolate it at those mentioned times and the sun swerved a little to the sun-set side, so paying it has become mostly binding and inevitable and that what he owes of (loan) has become his own.

To whom is Zakat Al-Fitrah to be paid?
The funds collected under the title of Zakat Al-Fitrah are to be spent on the poor and the needy bearing in mind the conditions which have already stated in the topic of Zakat of Al-Fitrah and it is permissible to convey or transfer the money to the Imam (P.B.U.H.) or his deputy-the jurisprudent who contains the conditions required even though there were one who is worthy of taking Zakat.

But, on the opinion of, the Higher Religious Authority, his imminence Assayyid Ali Al-Husseini As-Sistani (May Allah keep him safe and secure) they are not to be transferred to any party other than the Imam or his deputy outside the country even though there is one who is worthy of it. Besides, the non-Hashimite cannot pay Zakat of Fitrah to the Hashimite one…but it is legal for the Hashimite to pay the Zakat to others.
#Social_Solidarity(The_right_of_the_poor_lies_in_the_wealth_of_the_rich)
The most Readable one
War… The Forced-Choice in Islam
1654
To Whom Should Al-Khums be given?
1311
Giving the Zakat of Al-Fitr / Signs and Consequences
1305
Zakat (Al-Fitrah)
1236
The Companions of the Cave A Story
1131
Kinds of Az-Zakat and Charities… when Islam grants its individuals good living
1116
Zakat Al-Fitrah …How much? When…? And To Whom?
1114
Malik Al-Ashtar Al-Nukhaee… His Kinship and Birthday
1087
Zakat… To whom is to be paid? What are the conditions imposed on those who possess wealth?
901
The Islamic Year and the Migration Calendar
862