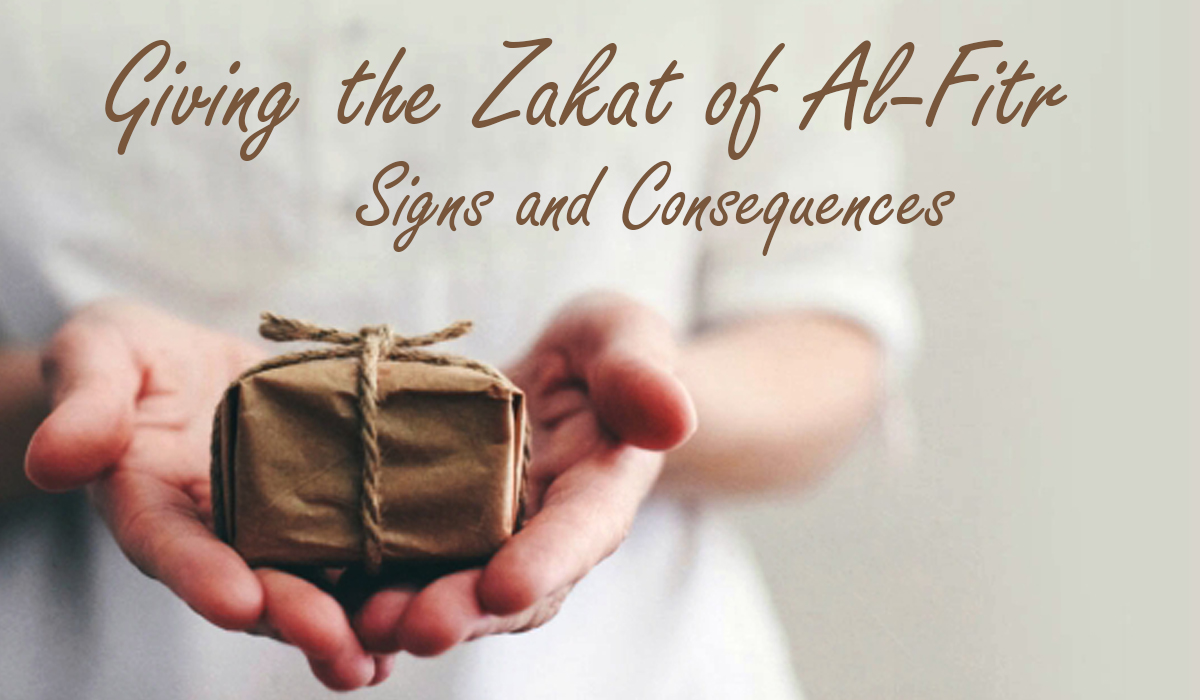 Giving the Zakat of Al-Fitr / Signs and Consequences

"….. And MY Mercy embraces everything. That (Mercy) I shall ordain for those who are Muttaqun-the pious and those who believe in our (proofs, evidences, verses, lessons, signs and revelations)." (Al-A'raf:156) and a part of the extent of His Mercy that He came with several legislations which take care of man's life on the whole for being the noblest of His Creation till He finalized it with the legislature of Islam which He made it as a religion of mercy among the people through solidarity, cooperation on the way of charity and piety (….and cooperate on charity and piety not on committing sin and transgression and fear Allah for Allah is Severe in punishment. (Al-Maedah:2).
This heavenly breadth of Mercy has been embodied in several Islamic legislations for the sake of regulating the lives of the people including the legislation of Zakat Al-Fitr which takes place in the end of the noble fasting month of Ramadan.
This legislation has been known since the time of the Messenger of Allah (P.B.U.H.) up to the present time and for this reason this month is named as Zakat Al-Fitr for being given after the whole of Ramadan is over which is announced publicly to be exactly in due course with regard to what follows as Eid of Al - Fitr. As for time of its delivery to those who deserve the Zakat
But as for restricting the quantity and the quality of this Zakat, we can exclusively determine that the whole matter refers to the qualifications of the widely-followed Supreme Religious Authority of all the Moslems in whose hand does lie the decision of such restriction some days before the time of breaking the fast is due.
So, in order not let confusion take place in between Zakat of Al-Fitr and Zakat of wealth, legislators sum it up in one main point which sounds reasonable to avoid the occurrence of that intervention between them i.e. reference to intention of the giver of the Zakat himself.
Zakat of property (wealth) is specialized and restricted to materialistic belongings of man such as buildings, furniture and anything that the individual owns …whereas Zakat of Al-Fitr is restricted to the purification of the human soul and body and among the denotations of legislating Zakat of Al-Fitr is that it is: a kind of social solidarity which is to be paid to the poor and the needy by those who are well-to-do people or those who are extremely rich and who are able to afford to pay…
Zakat is imposed on all Moslems without exception neither a fasting one, nor a fast - breaker nor even children for all are involved in it without any distinction or differentiation But for ease of understanding what to do especially those whose incomes are limited and who can't make both ends meet, so, with the bliss of Zakat, embarrassment has been removed from them: "Allah intends for you ease and He doesn't want to make things different for you.……" (Al-Baqarah:185) It is so much so because most people can't afford to pay the duty of Zakat or from the surplus they leave behind.
The other cause which is more pressing is that, by means of satisfying the demands of the vast majorities of the poor and the needy during the end of this most benevolent and blessed month of Ramadan is that vast and wide meeting of the people in all their types and colors without any distinction among one another heralding the advent of the forthcoming joyous festival without distinction or differentiation between them.
This purification of the heart, the body and the soul through giving the Zakat of Al-Fitr is but a joy that overwhelms all people in their spectra colors and origins.
It does not restrict itself to the beneficiaries and the needy but  also involves those who pay it - for  this Zakat is a true kind of one's purification of all kinds of filth, dirt and anything that may be impure whether such filth came forth from a misdeed, bad conduct or acts which may not violate the sanctity of this noble month and in consequence displeases Allah, the Almighty: "Indeed  whosoever purifies himself (by avoiding polytheism and accepting Islamic Monotheism) shall achieve success." And remembers (glorifies) the Name of His Lord (and worships none but Allah"(Al-A'ala:14 -15) and perhaps among the consequences of this noble month is that it breeds in man the spirit of permanent benevolence and mercy and to be embodied as general behavior-not being restricted to the blessed month of Ramadan only but trespasses it to cover the whole year round.

#Social_Solidarity(The_right_of_the_poor_lies_in_the_wealth_of_the_rich)
The most Readable one
War… The Forced-Choice in Islam
1654
To Whom Should Al-Khums be given?
1311
Giving the Zakat of Al-Fitr / Signs and Consequences
1304
Zakat (Al-Fitrah)
1236
The Companions of the Cave A Story
1131
Kinds of Az-Zakat and Charities… when Islam grants its individuals good living
1116
Zakat Al-Fitrah …How much? When…? And To Whom?
1114
Malik Al-Ashtar Al-Nukhaee… His Kinship and Birthday
1086
Zakat… To whom is to be paid? What are the conditions imposed on those who possess wealth?
901
The Islamic Year and the Migration Calendar
862