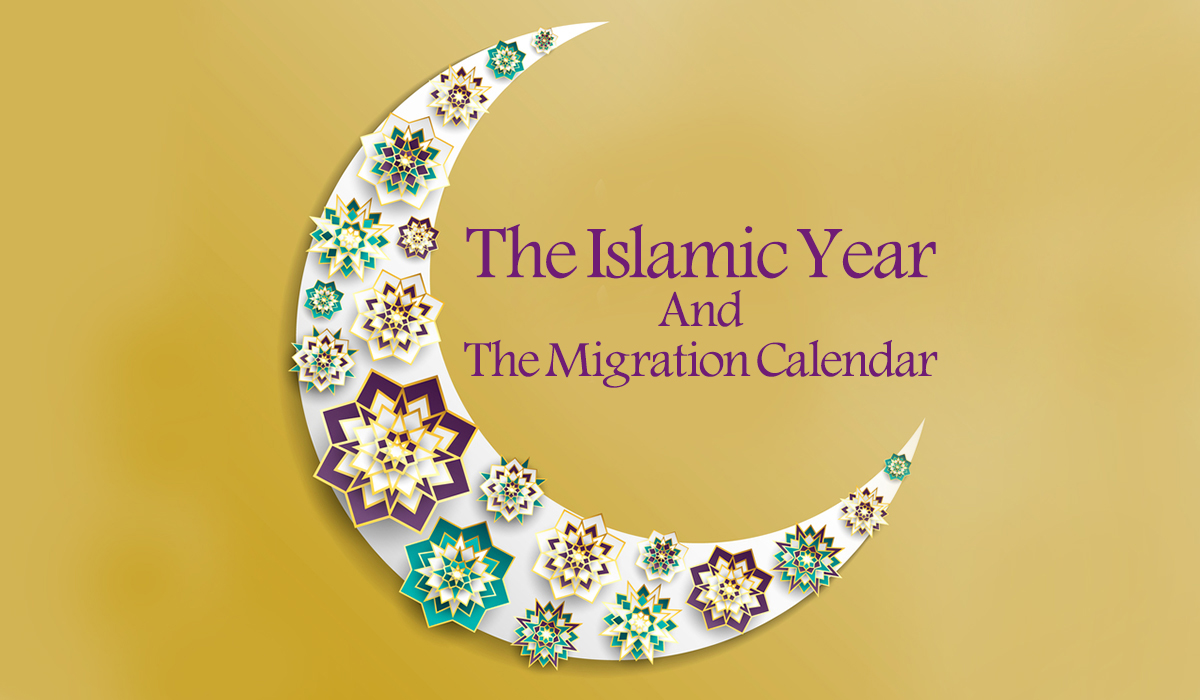 The Islamic Year and the Migration Calendar

It is inevitable for every nation of the world or any human gathering to have a calendar of its own, that is, by choosing a national occasion or a great famous event to be helpful in regulating the incessant multitudes of events lest they, perhaps become intervened with one another.

Building on the foregoing, they were in need of a criterion to get them remembered, recorded and kept stored - together with their minutest details, dates, time and place of their occurrence and to be relied on in what follows of other new events or probably the events that preceded them, too with regard to incidents, situations and rather daily affairs without which life records may get shattered away and the events therein would look messy and without discipline and this state of being will necessitate dependence on what is called: "calendar"  the in-box memory of this nation, the store-house of its memoirs and the time record of its events.

Moreover, the calendar represented its civilization, history, culture and perhaps its religion as well. This significant factor has made it a civilizational necessity and an urgent need for abiding by it more and more as long as life became complicated and daily dealings interwoven and life itself developed particularly the systematic and administrative sides.

Out of all this emerged, came into being the A.D. Calendar with reference to the birthday of the holy Christ and the Chinese, the Persian, the Roman and the Jewish calendars.

The calendars of these nations differed in exacting their timing of them and their starting-points. Some arranged their calendar according to the months of the solar system and others to the months of the lunar system as this is distinct in what the Muslims follow up to now that is, they have taken the movement of the moon as a criterion for counting their years and exacting their events in accordance with days, months and years which could be achieved according to this movement.
"It is He Who made the sun a shining thing and the moon as a light and measured out for it stages that you might know the number of years and reckoning.

Allah did not create this but in truth. He explains the "Ayat" (proofs, evidences, lessons, signs, revelations, etc.) in detail for a people who have knowledge."(Younis: 5) considering the creation of 'daytime' is but a motional generation of day and night and of a group which reckons months and years.

The twelve months of the lunar system with regard to the Islamic calendar is not innovated by an astrologist or invented by a theological expert; it is but a subtle and divinely ordained law: " Verily, the number of months with Allah is twelve months (in a year) so was it ordained by Allah on the Day when He created the heavens and the earth.; of them four are Sacred (i.e. the 1st, the 7th, the 11th and the 12th months of the Islamic calendar)"  That is the right religion, so wrong not yourselves therein and fight against the 'Mushrikin'(polytheists, pagans, idolaters, disbelievers in the Oneness of Allah) as they fight against you collectively.
But know that Allah is with those who are Al-'Muttaqin' (the pious)."(Al-Tauba: 36) which has arranged to them the way to reckon their days, months and years accordingly and thus the calendar has become divinely ordained-  characterized with accuracy and exactness and consequently, it won't be subjected to any man-made authority whereas the astrologists or even some religious authorities dare to fix or restrict or play with the other calendars in respect of the lengths of their months and their locations.

The Arabs, in the pre-Islamic era or at least, before the Prophetic Commission for about one century period, had been reckoning their months according to the motion caused by the lunar system-not according to the solar system and they had got the same arrangement of the months that they are now in use; so, they used to exact their data through the first appearance of the crescent in the sky.

They used it to record numerous and diverse events such as: the "Year of the Elephant" and that is the year when Abraham Al-Habashi had launched an offensive over (Al-Ka'ba)
And another about the Prophet Abraham (P.B.U.H.) who was ordered to build the Honorable Ka'ba when at a certain time, they chose to record the Collapse of Ma'rib Dam in Yemen as an event from which their calendar stemmed until Islam came to undertake the task of recording most of their events and perhaps exacted and fixed the time of their occurrences when the Messenger of Allah appointed his migration from Macca to Al-Madina as the beginning of the Islamic calendar.

Indeed, that was the first of the month of Rabee Al-Awal in the thirteenth year of the Prophet's Commission (the beginning of Allah's sending down His Heavenly Revelation to His Messenger (P.B.U.H.) and making him hold the post of Prophet-hood and appointing him as a prophet to all the people on earth.

Then, the Prophet went on recording his formal books depending on that calendar as the starting-point of the Islamic history and since that date it came to be a reliable date to the whole of the Islamic world considering their migration with the holy Prophet as a significant event which was regarded as a stage of transference from the location of polytheism into the wide space of their freedom of practicing their beliefs in Al-Madina which has been selected by the Prophet as a starting-point of his movement toward sociological change.

At this stage events increased and situations became complicated with the passage of time and all this took place during the third year of the migration and that in the fifth year of the migration and so on till getting to the year 1437 H. and 1438 H.
The lunar months are: Muharram, Safar, Rabee Al-Awal, Rabee Al-Thani, Jamadi Al-Ula, Jamadi Al-Ukhra, Sha'ban, Ramadhan, Shawal, Thul-Qida and Thul-Hijja.
Despite the Islamic lunar year will be reckoned from the beginning of the month of Rabee-Al-Wal but its beginning causes a change to the month of Muharram during the rule of the second caliph by a sign from Ali bin Abu Talib (P.B.U.H.) and that refers to two reasons:
The first, goes in agreement with the Arabs custom before Islam and that is: by considering Muharram as a beginning of their year and the second one is that: by preventing the act of partitioning the year whose months are not to be employed in war to two years through gathering them together in one month according to their serial number.

#The_Prophet_of_Islam
The most Readable one
War… The Forced-Choice in Islam
1655
To Whom Should Al-Khums be given?
1313
Giving the Zakat of Al-Fitr / Signs and Consequences
1306
Zakat (Al-Fitrah)
1237
The Companions of the Cave A Story
1131
Kinds of Az-Zakat and Charities… when Islam grants its individuals good living
1117
Zakat Al-Fitrah …How much? When…? And To Whom?
1116
Malik Al-Ashtar Al-Nukhaee… His Kinship and Birthday
1087
Zakat… To whom is to be paid? What are the conditions imposed on those who possess wealth?
902
The Islamic Year and the Migration Calendar
862