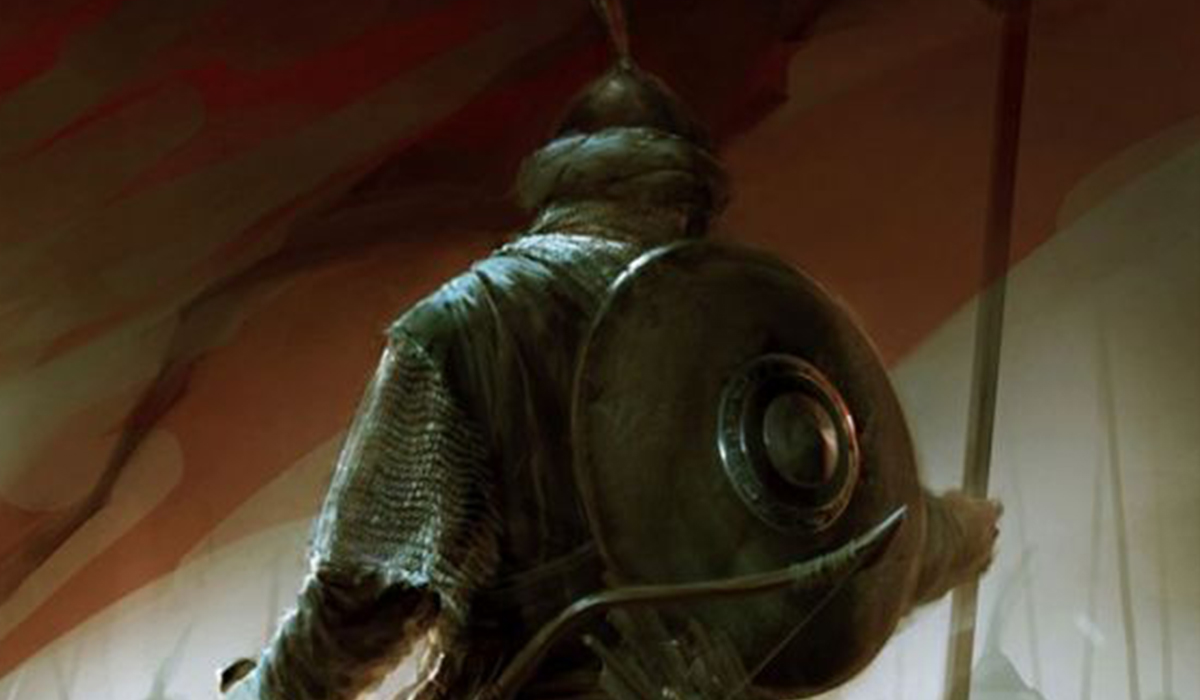 Malik bin Al-Harith bin Al-Nukha Al-Mad-haji (May Allah be pleased with him) was born in Yemen but historians differed from one another in his birth date – among them some who said that he was born before the Honorable Prophetic Migration by approximately 23 years while others said that he was born at a period between (25-30) before Hijra (the Prophetic Migration.).
He became a Muslim between the hands of Allah's Messenger (P.B. U.H.) After his affiliation to Islam, he proved to be an ideal Muslim with a high level of faith in it. Then, he migrated with those who migrated of his tribe (Bani Al-Nukha') to Al-Kufa after the expansion of Islam and kept on accompanying Imam Ali after the death of Allah's Messenger (P.B.U.H.) and paid him a true pledge of allegiance and he was also among his sincerest of companions or rather nearest and the dearest one.
He had a share in the burial ceremony of the most wronged character of Islam and the awesome companion Abu Dhar Al-Ghifari in Al-Rabadha and won the honor of the Prophet's convention (P.B.U.H.) who crowned him with the title of the "faithful" who, on his behalf and in his own words, said: "Verily, if any of you would die in a desert would be witnessed a band of the faithful believers."

Distinguished Features of his Character
Malik was of tall stature, good-looking, courageous, mighty, vigorous and stern, reputed as poet, knowledgeable, highly awesome and elderly among his community, with deep faith in Islam, well-mannered, endowed with chastity and frugality, renowned for piety, nobility, ever robust and stalwart with his foot deep-rooted on the path of truth, with no spirit of showing courtesy to anyone on his behalf at all and keeping nonchalant if being reproached in Allah's sight by an intruder.

His Bravery
Malik Al-Ashtar has been a highly qualified leader, a fierce fighter and a courageous hero, renowned. He took part in so many battles of Muslims against the unbelievers among those battles is the battle of Yarmouk with army of the Romans at which his lower eyelid was cut into two parts and for this reason he was nick-named among the people as Al-Ashtar.
He also took part in the Battle of Camel with Ali bin Abi Talib (P.B.U.H.) as well as in the Battle of Siffin in which he showed a matchless bravery where he was before that a great leader of the Islamic armies.
One of the several situations in which he was engaged was that he once was ordered to undertake the task of opening a very fortified castle which belonged to one of the cities of Al-Sham (now Syria). When he had a look at the castle he found tightly besieged and had not the least experience of opening such a castle while they had at their disposal a thousand of fighters. So he ordered them to shout loudly and with one unified voice: "Allah is the Greatest".
On hearing that, those inside the castle estimated the number of the fighters outside of the castle as being tenfold (10000) greater than they really were. At this point, they sent to Malik asking them for reconciliation, and thus, he reconciled them and entered the castle and wandered about its paths and lanes, then he ordered his army to get out of the castle after having them entered into his obedience.

Being Exposed to Repeated Exiles
Malik's supportive situations to Ali bin Abi Talib (P.B.U.H.) gand his absolute allegiance to him have caused him so many harms and troubles to him for he was sent with his group such as:
Kumail bin Ziyad, Sa'sa'a bin Suhan, Uthman bin Affan, the third political caliph from Kufa to Al-Sham; then Saeed bin Al- Ass, his guardian to Kufa had detected them and sent their names in a report to the Caliph, then, too Muawiya, guardian of Uthman to Al-Sham but Uthman had them returned to Al-Kufa.
Later on and once again, Saeed bin Al-Ass had written to Uthman and this time he had them exiled to Hims until the people of Kufa themselves had decided to send Saeed bin Al- Ass from Kufa city and the people of Kufa themselves have written to them and all came back from exile to Al-Kufa and contributed to the dismissal of Saeed bin from the city of Al-Kufa.

Both Wars of Al-Jamal and Siffin:
When Imam Ali (P.B.U.H.) took office after the killing of Uthman, Malik bin Al-Ashtar had the full share of Ali's companionship and support for he took part in the two fiercest wars against the unbelievers verbally: The war of Al-Jamal where he was appointed to guard the right wing (recto) of the Islamic army and the War of Siffin in which the army of Imam Ali (P.B.U.H.) was about to win victory but for the deceptive means of raising the Scriptures over the heads by the proposal of Muawiya's army.
In both wars, Malik proved to be a wise leader and a stern defender of the program of right and truth which is well represented in character of Imam Ali bin Abi Talib. (P.B.U.H.)

His Rule Over Egypt
Ali bin Abi Talib (P.B.U.H.) has appointed Malik Al-Ashtar as Guardian to Nasibin but the disturbing conditions in Egypt has made Ali (P.B.U.H.) exclude him from ruling Nasibin and appointed him a ruler over Egypt to quieten the conditions there, bearing to them the book that Ali (P.B.U.H.) has handed it over to him in whose introduction came the following items:
"And after all, I have sent to you a slave of Allah's slaves who never sleeps on the days of fear nor upsets his people in hours of horror against the enemy, more vigorous against the debauchers than a burning fire," and he is Malik bin Al-Harith, the brother of Madhaj.,"
"So, give him an attentive ear and obey his orders and he is a sharp sword of Allah's swords. If he orders you to launch an offensive, do launch and if he orders you to stay where you are, obey his order, for he doesn't go forward, nor backward, nor retreats, nor slackens, nor delays or becomes hasty without having his orders from me."
"I have favored him over myself for he is a good counselor to you in time of hardship and a fierce and strong-willed defender of you against your enemy."

His Martyrdom
When Imam Ali bin Abi Talib (P.B.U.H.) has appointed Malik as a ruler to Egypt and kept his well - known promise to him, Ali stayed in wait for receiving what Malik would tell him in his message to him of news about what is going on of events to the people there but the messenger of death was faster than the receipt of Malik's message to him for Muawiya has put poison in a liquid on his way to Egypt by one of his assistants in a poisoned glass of honey at which Malik has lost his life and that was in 38 H. Muawiya got pleased at the news of Mlik's killing and he said his reputed saying: "Verily, Allah has got soldiers of honey."
What People said about Malik:
When the sorrowful news of Malik's martyrdom came within reach of the Imam (P.B.U.H.) got displeased at his sudden and unexpected event and stood up giving a speech to a gathering of people there and amongst what he said was the following:
"Malik! What kind of man Malik had been! If only he were a mountain, it would have been higher than all and if he were a stone, he would have been more solid the most solid one and if he were a stalwart, he would have been the fastest. "
Then he said: "We belong to Allah and to Him shall we return. "And praise be to Allah, the Lord of all the worlds. O Allah I reckon his judgment to You, My Lord! For his death is but a great misfortune. May Allah show His Mercy to Malik for he was to me as I was to Allah's Messenger."
But as for Muawiya, he rose to his feet after the death of Malik and delivered a speech addressing a gathering around him saying: " Ali has got two right hands: one was cut off in Siffin-meaning Ammar bin Yasir and the other one today."
#The_Prophet_of_Islam
The most Readable one
War… The Forced-Choice in Islam
1654
To Whom Should Al-Khums be given?
1311
Giving the Zakat of Al-Fitr / Signs and Consequences
1305
Zakat (Al-Fitrah)
1236
The Companions of the Cave A Story
1131
Kinds of Az-Zakat and Charities… when Islam grants its individuals good living
1116
Zakat Al-Fitrah …How much? When…? And To Whom?
1114
Malik Al-Ashtar Al-Nukhaee… His Kinship and Birthday
1086
Zakat… To whom is to be paid? What are the conditions imposed on those who possess wealth?
901
The Islamic Year and the Migration Calendar
862