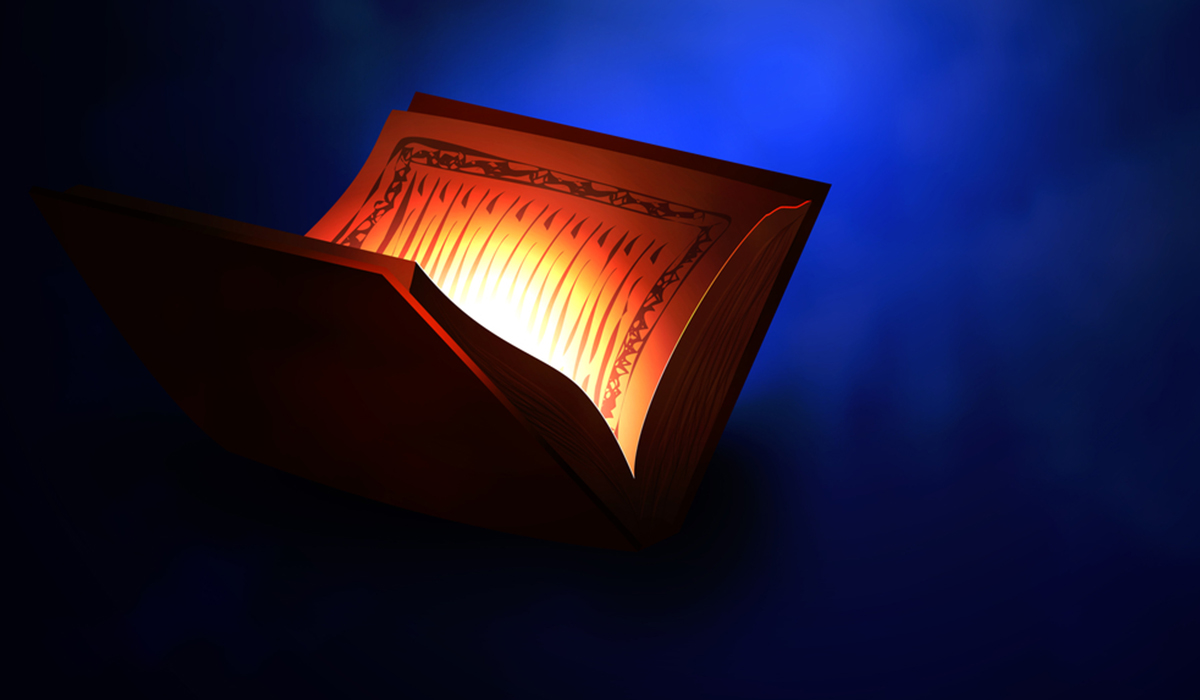 The Interpretation of the Quran

The Ranks and Positions of Ahlul-Bayt in the Holy Quran
The holy Quran has demonstrated in several of its honorable verses the high status of Ahlul-Bayt and their appropriate positions (P.B.U.T.) in Allah's Sight and for the sovereignty and supremacy of their characters, the holy Quran called the Muslims to love them and endear themselves to them for they were the divine gate-ways of Allah, the Exalted, through which the faithful believers can enter and they were in fact, the second weighty treasure who are regarded as next to Quran in estimation and consideration and that they are the means of conveying Allah's Mercy which contained everything:
"My Mercy embraces everything. That (Mercy) I shall ordain for those who are the Muttaqin (the pious and give Zakat, and those who believe in Our Verses (proofs, evidences, lessons, signs, and revelations) and adding to certitude, the Quran has clearly shown within an open and obvious verse the Divine Will in purifying and taking filth away from Ahlul-Bayt (P.B.U.T.) thoroughly as shown in the following verse:
"Verily, Allah wants only to remove (evil deeds and sins) from you O members of the family of Ahlul-Bayt from you and to purify you from filth thoroughly." (Al-Ahzab:33). The Quran also indicated the scientific aspect of Ahlul-Bayt (P.B.U.T.) for it cited to people that they are the inheritors of the knowledge that is stored in the Scripture. See how the Quran lucidly exhibits this point to the people when it says:
"Then, We gave the Book (the Quran) as inheritance to such of Our slaves whom We chose (the followers of Muhammad). Then of them are some who wrong themselves and of them are some who follow a middle course and of them are some who, by Allah's Leave, foremost in good deeds. That (inheritance of the Quran) is indeed the great grace." (Fatr: 32)
So, because the Quran is divinely preserved in a safe location
"Verily, We, it is We Who have sent down the Dhikr (i.e. the Quran) and, surely, We will guard it from corruption." And thus openly and absolutely negates any aversion-be it increase or decrease- and that falsehood cannot enter it to defect it; therefore, the Quran is an infallible Book and its infallibility necessitates those who inherit their knowledge to be infallible so as to make everything to clear-away from vagueness, ambiguity, caprice and personal judgment.
This is an evident proof of the infallibility of Ahlul-Bayt-closely attached to the infallibility of the holy Quran for an infallible Book, heavenly- kept cannot be inherited to people who are not infallible!!
So, who can grant a verified interpretation of the Quran the like of what Allah has willed and ordained, if one is not well cut out for the task and whose knowledge is inadequate to cover or undertake the diverse aspects of religion in terms of putting it into practice?
For infallibility is a must because the person who claims to be infallible, ought to be equal in weight and standard in contrast with the Quran.
To add more to what is confirmed, some Quranic texts enhances such a proposal which states that they inherited the knowledge of the Book, Divine Revelations and the Imamate which the Book has termed as the "Great Kingdom" due to its "grandeur" and consideration." (Al-Nissa:54):
"Or do they envy men (Muhammad and his followers) for what Allah has given them of His Bounty? Then We had already given the family of (Ibrahim) Abraham, the Book and Hikmah (As-Sunnah)-Divine revelation to those Prophets not written in the form of a book) and conferred upon them a great kingdom."
(Al-Nissa: 54)
So for their many attributes and for their high ranks in Allah's Sight, the heavenly command came to the holy Prophet (P.B.U.H.) that he should inculcate into the people's hearts the love of Ahlul-Bayt (P.B.U.T.) for their love is equal to the value of conveying the message of Islam which the Prophet had brought to the whole of mankind and delivered them from the gloom of polytheism and misguidance:
"Say: (O Muhammad) ". No reward do I ask of you for this except that you cherish friendliness to those who are really my relatives. And whoever earns a good righteous deed, We shall give him an increase of good in respect thereof. Verily, Allah is Oft-Forgiving, Most Thankful."(to those who obey His Command.)"
(Ash-Shura/23)
But the nation of Islam did not bind themselves to the Book of Allah, nor to the recommendation of His Messenger (P.B.U.H.)
in the matter of showing love and friendliness to Ahlul-Bayt
(P.B.U.T.) and their followers nor glorifying their virtuous deeds and characters.
But their lot, out of this nation, was but killing, displacement, torture, poisoning or displacement and for this reason they didn't relish any stability or taste the odor of security without dropping themselves in the lap of Islam by following the Quran and the prophetic legal acts.

The Prophetic Sayings on Behalf of Remembrance of Ahlul-Bayt In the Holy Quran
In addition to the foregoing Quranic proofs in the matter of the Divine Selectivity of Ahlul- Bayt (P.B.U.T.) and the fact of their being equal, part and parcel, with the first weighty treasure i.e. the Quran together with their being the bearers of spectra colors of knowledge, came the recommendations of the noble Prophet (P.B.U.H.) in a repeated manner by depending on the second weighty treasure after the Book to certify their Imamate one after another according to their chronological order.
Among his countless sayings is the following: "He who loves me, let him keep his love for me and he who loves me, let him love my pure progeny; I am leaving to you the two weighty treasures: The Book of Allah and my pure progeny; therefore, he who loves my pure progeny, ought to love the Quran, for this obligatory love manifests itself clearly by taking them as Imams who were well-qualified for the interpretation of the Quran, the demonstration of its judgments, the divine legislations and everything that came from Allah in the holy Quran till Doomsday.

The Sayings of the Pure Imams about the Second Weighty Treasure (i.e. the Quran)
Amir Al-Muminin Ali bin Abi Talib (The Prince of Believers) (P.B.U. H.) on describing the positions and ranks of Ahlul-Bayt (P.B.U.T.) has said: "Verily, Allah, to Whom be ascribed all glory and perfection has purified us, made us infallible and witnesses on His Creation, made us His Proof on earth, made us with the Quran and made the Quran with us neither abandoning it nor it abandons us," together with his saying (P.B.U.H.) of Ahlul- Bayt and he is, of course, included with them:
"We-Ahlul-Bayt, are not to be contrasted or measured by others for, in our favor, the Quran was descended and in our favor exclusively is the source of the heavenly mission.
Besides, there are recurrent and frequent sayings issued by Ahlul-Bayt (P.B.U.T.) which reveal their positions and esteems and that they are equivalent the Quran in value and assessment….and the rope which Allah, the Almighty, has ordered us to hold on to it.
Imam Al-Sajjad (P.B.U.H.) says: "Our example, in the Book of Allah, is like a niche; so it is we who are the niche and within the niche there is a lamp and the lamp is in a glass; this glass, symbolically, represents the noble person of the Prophet Muhammad (P.B.U.H.) which is likened to a brilliant star, lit from a blessed tree, an olive." And Ali said:
"Neither of the east nor of the west but it is exposed to the sun all day long) whose oil would almost glow forth (of itself) though no fire touched it." Light upon Light! Allah guides people to His Light (through His Quran) whom He wills." meaning, guiding people to paying loyalty to us- we - Ahlul-Bayt.
The same interpretation is given by his son Imam Al-Baqir (P.B.U.T.) Allah has made the loyalty of the people to us the axis round which the judgments of the holy Quran as well as all other Books go from which they take the light of guidance and by means of it faith becomes manifest.
Allah's Messenger has ordered the people (P.B.U.H.) to take the Quran as well as the Imams (Ahlul-Bayt) as their examples. Before the Prophet's speech comes to an end he addressed the people by saying: " I am leaving to you these two weighty treasures-the Great weighty treasure and the Small weighty treasure.
The Great one is the Book of my Lord and the Small one are my own pure progeny of Ahlul-Bayt, therefore keep my remembrance in these two treasures, for you will never get misled at all if you bind yourselves to both of them altogether.
#Moslem's_Holy_Scripture
The most Readable one
War… The Forced-Choice in Islam
1654
To Whom Should Al-Khums be given?
1311
Giving the Zakat of Al-Fitr / Signs and Consequences
1305
Zakat (Al-Fitrah)
1236
The Companions of the Cave A Story
1131
Kinds of Az-Zakat and Charities… when Islam grants its individuals good living
1116
Zakat Al-Fitrah …How much? When…? And To Whom?
1114
Malik Al-Ashtar Al-Nukhaee… His Kinship and Birthday
1086
Zakat… To whom is to be paid? What are the conditions imposed on those who possess wealth?
901
The Islamic Year and the Migration Calendar
862