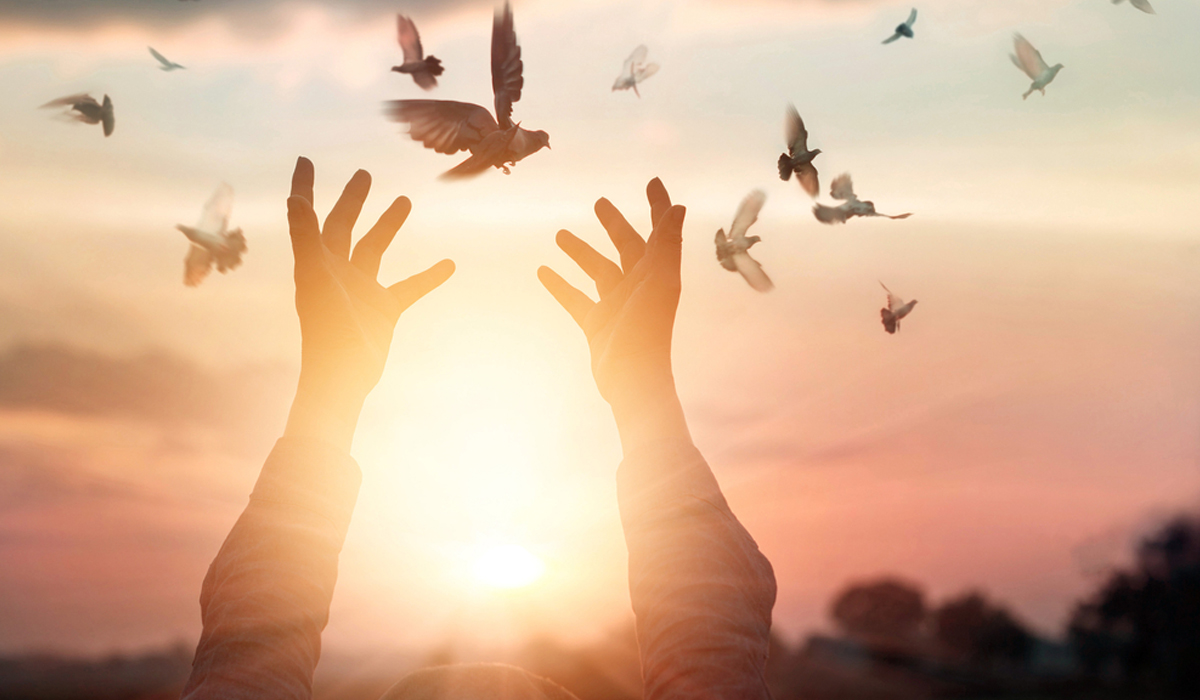 Compassion, linguistically, means showing sentiments of sympathy, leniency, mercy and tenderness in business transactions, daily life dealings with one another within the human and animal society.  When we say: The community sympathized with one another means: They showed mercy to each other. The following two words: (Al-Rahman Al-Raheem) means The Merciful- the Compassionate are but sublime names of Allah and mercy is one attribute of His Almighty; therefore, the first verse of the holy Quran which Has become the beginning for all the chapters of the Quran (In the Name of Allah, the Merciful, the Compassionate)
and this same verse bears two of Allah's attributes which denotes 'mercy.'
It was narrated from the Prophet (P.B.U.H.) that he said: "Allah has placed mercy in one hundred parts and He kept with Him ninety parts and sent down to earth one part only and out of that part, people sympathize with one another till the mare lifts its hooves from its child so that it may not hurt.) and with this a mother keeps vigil with this same part of mercy, during the chilly wintry nights and with this part, too, the beast feels affectionate towards its little offspring, breastfeeds it and protects it from any possible danger.
So, because compassion is a commendable trait which is beloved by Allah, the Merciful, the Compassionate, he, wills to see its effect on His creatures. From the Prophet came:" Believers in compassion, friendliness, and sympathy, are like the human body which, if one limb of your bodies hurts or feels painful, your bodies will get feverish and keeps vigil in pain till dawn time."
Imagine a human or an animal society thoroughly devoid of mercy and deprived of kindness, what will then happen to that society and how will it be?
The father will abandon his children who will consequently be left to the fangs of time to annihilate them all and the mother who will possibly leave her newly born child in the pathways to die of thirst and starvation nor will the beast care about her little newly-born kid by not breastfeeding him nor does she protect him till he perishes away and the eggs will be hatched in the nests owing to the departure of the birds and be left to the care of destiny to undertake their fate.
Building on the foregoing, man will diminish and fade away so soon taking away with him all the living creatures and life at one go will come to an end and nothing will remain on earth in a span of few days on account of the entire absence of mercy, compassion; this mercy which Allah, the Almighty, has kept in the heart of man in this temporal world constitutes only one out of one percent of what our Lord owns in the hereafter to be given to those who have been rebellious and the sinners  against the divine power of Allah, the Almighty; therefore, how wide is the size of the divine mercy and how great Your mercy, our Lord is!!!
Allah in the holy Quran says: " And My mercy has extended to everything." And in the same chapter of Al-Araf His Prophet was remembered by the Lord of the Prophet's affection and mercy as in: "Verily, there has come to you a Messenger from amongst yourselves (i.e. whom you know well) It grieves him that you should receive any injury or difficulty. He is anxious over you to be rightly guided, to repent to Allah and beg him to pardon and forgive your sins." (Al-Tawba 128)
Mercy is not limited to man only but rather involves even the animal world. One of the companions of the Prophet said: "While we were with the Prophet (P.B.U.H.) we saw a bird of reddish with its two chicks, so we took its two chicks and the bird of reddish came and took its place close to us, The Prophet exclaimed saying: "Who grieved this bird by seizing its chicks?" Return its chicks to it.
Mercy and compassion are not only found in Islam but also in other heavenly religions because the source of these religions is one. Allah has said in the Old Covenant addressing Moses(P.B.U.H.): "Verily, Allah is but One God- Merciful, Lenient, Ever- patient, abundantly Merciful, Ever-trustful and Ever- preserving mercy for thousands" (34/ 6-7) and in the Torah He said addressing man saying: " Does a woman forget its infant and show no mercy to he is in her abdomen?" "Even these forget but I don't forget you (Ashia 49/15) and in the Gospel came  It came also in the Bible – the fifth Testament of Mathew Gospel (Beatitude to those merciful ones, because they will win God's mercy) At this time through which we live exceptional conditions and hard situations, we feel that we are in urgent need of applying humanity on the ground of reality and mercy as well principally so that we can rectify our affairs and alleviate the pain of earning a living and the onset of poverty and illness.
How nice life will be if we cooperate and cater for one another in that the strong undertake the responsibility of the weak and the rich of the poor and the needy to make living together easier and happier and eventually win the consent of Allah (Glory be to Him) and in that case only Allah's wide and broad mercy would cover us all. He is the most Merciful of the merciful.
#Islam_Moralities
The most Readable one
War… The Forced-Choice in Islam
1654
To Whom Should Al-Khums be given?
1311
Giving the Zakat of Al-Fitr / Signs and Consequences
1305
Zakat (Al-Fitrah)
1236
The Companions of the Cave A Story
1131
Kinds of Az-Zakat and Charities… when Islam grants its individuals good living
1116
Zakat Al-Fitrah …How much? When…? And To Whom?
1114
Malik Al-Ashtar Al-Nukhaee… His Kinship and Birthday
1086
Zakat… To whom is to be paid? What are the conditions imposed on those who possess wealth?
901
The Islamic Year and the Migration Calendar
862