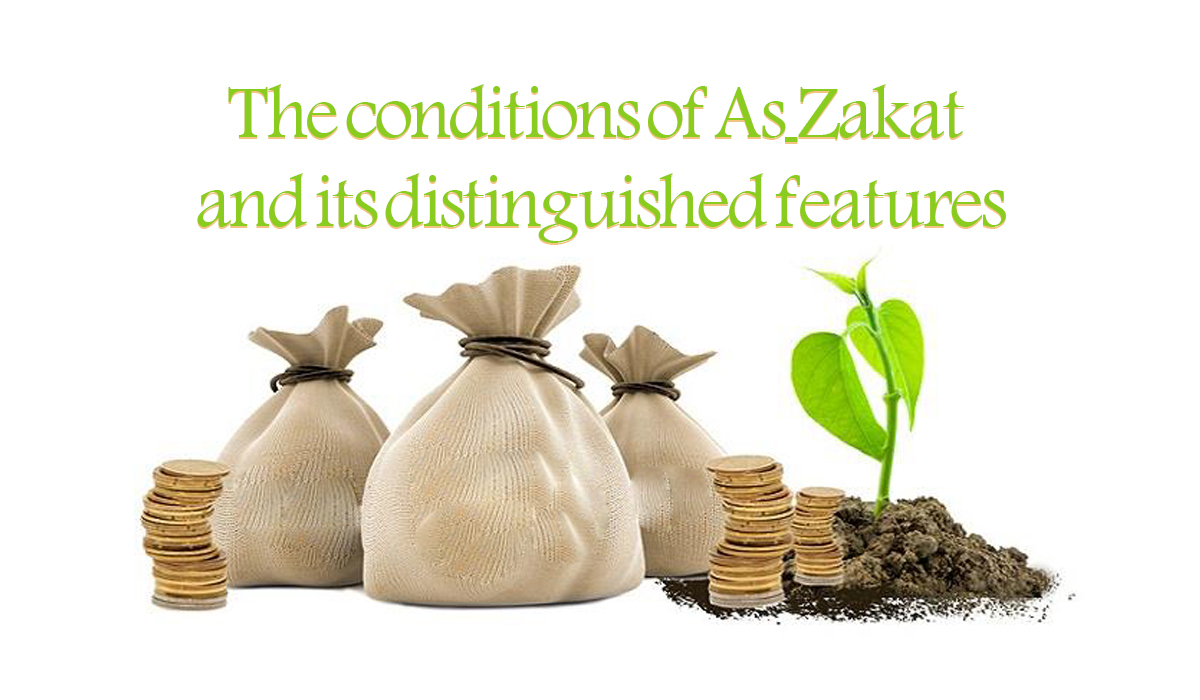 The conditions of As-Zakat and its distinguished features

Zakat can't be imposed on a Moslem other than the conditions jurisprudents have stipulated and agreed on to be legally true…as stated in the following points.
1. Private Ownership:  It is inevitable for a Moslem to be charged with Zakat unless he really owns special kinds of animals which are legally permissible to be slaughtered and they can't be proven as true until after thorough investigation into the matter of their ownership-either to the claimer or to another party or to a mosque.
2. Maturity: It is inevitable for the owner of the property to be wise, not crazy; therefore, the assets cannot be verified as belonging to an immature one.
3. Possessing a sound mind: The owner ought to be possessing a sound mind, not crazy or behaving like a fool.
4. Freedom: For without it, Zakat is not compulsory on him to be paid.
5. Necessity of having full power and authority of taking action or decision; therefore, the owner or his guardian should be in full control over the wealth so that he can freely manage that necessitate payment of Zakat.


Zakat is also not to be paid for the wealth which is robbed or stolen - whether being movable or immovable property or of being detained or mortgaged or in other people's hands or that which is allocated for vows.

What are the things which demand Zakat payment?
There are three kinds of animals which necessitate payment of Zakat and they are as the following:
The three kinds are:
1. Camels-cows-sheep
2. The four agricultural foodstuffs are: wheat - barely - dates - raisin.
3. The two coins are: gold and silver
4. The wealth that comes from (mostly legally binding) trade and commercial business in accordance with the opinion of his eminence – the Shiite Supreme Religious Authority – As-Sayyid Ali Al-Hussaini As-Sistani (May Allah preserve his overwhelming shade).
For each one of these animals special details and conditions are mentioned in long reference books whose most important is: (Menhaj As-Salihin) which is a program handled by the Shiite Supreme Religious Authority - his Eminence-As-Sayyid Ali Al-Hussaini As-Sistani (May Allah prolong his age and keep him safe).
These are the only animals which are included in paying Zakat by the owners who possess them. But in case of approval, Zakat can be paid for cereals such as: sesame, rice, beans lentils, corns and the like but Zakat is not approved in vegetables such as: melons, watermelons, cucumbers, figs, pomegranates and the like.
#Social_Solidarity(The_right_of_the_poor_lies_in_the_wealth_of_the_rich)
The most Readable one
War… The Forced-Choice in Islam
1654
To Whom Should Al-Khums be given?
1312
Giving the Zakat of Al-Fitr / Signs and Consequences
1306
Zakat (Al-Fitrah)
1237
The Companions of the Cave A Story
1131
Kinds of Az-Zakat and Charities… when Islam grants its individuals good living
1117
Zakat Al-Fitrah …How much? When…? And To Whom?
1115
Malik Al-Ashtar Al-Nukhaee… His Kinship and Birthday
1087
Zakat… To whom is to be paid? What are the conditions imposed on those who possess wealth?
902
The Islamic Year and the Migration Calendar
862